What is Human Pup Play?
Pup play is when one person takes on the role of a pup or dog and another takes that of the handler or trainer. The pup acts like their canine counterpart and the trainer, for the most part, handles the pup like he would a biological pup. 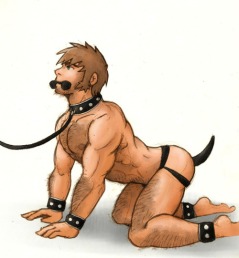 Another form of pup play that is emerging is pup munches, pack play or pups@play.

It’s not necessarily a sexual play, though it can be. For many it serves as a release of the animal part of them.

It is NOT bestiality: real animals are NOT involved.

Why do puppy play?

Because it’s fun! More to the point it gives the pup an opportunity to shed off their human personality and take on the simple, carefree existence of a pup. Puppies like and get lots of attention. They also however receive some control from their Handler, while still expressing their animal instincts and desires.

The Handler also revives benefit from puppy play. Pups are always happy to see you and play fetch with you. They serve as a companion and friend. The Handler has the opportunity to establish dominance through training, while still allowing the pup some freedom, especially when playing.

For many pups, puppy play is not about humiliation. This does not mean they may not also enjoy humiliation, or that humiliation play is bad, but it tends not to be a part of puppy play. In many ways puppy play is much like training a biological pup. You wouldn’t hit, kick, or abuse a new puppy to train him. Instead a firm but gentle approach is taken to training and discipline. Positive reinforcement is key; ‘good boy’ is spoken much more often than ‘naughty pup’ in puppy play.

What is pup headspace?

Headspace is hard to describe. It’s the mental state you put on when you are doing puppy play. Dogs live in the moment, they do not think about the past or present. They act on instinct rather than rationality. Dogs are pack animals and seek attention from the other members of the pack. They look to the other dogs for leadership and guidance, and will assert their own if they do not find it. Maintaining headspace is about putting aside the human thoughts and desires and thinking instead about a pup’s thoughts and desires.

What is needed for puppy play?

For most, puppy play is primarily a headspace. It is about a pup mentality, where your world consists mainly of what’s within four feet of the ground. Puppy play is cheap and can be done with a minimum of gear. That said, there is some gear that helps maintain headspace.

Collars – A collar may be the most important part of gear for a pup. Besides providing a place to put a leash and a tag, wearing a collar helps immensely in putting a pup into the proper headspace. Unowned pups should not wear tags.

Kneepads – A more practical consideration than anything, a cheap pair of kneepads from home depot will help keep your pups knees from being chewed up and allow for longer play.

Paws/Mitts – Paws help keep a pups hands restrained, preventing them from being used like a humans and also serving to protect hands during play.

Hoods/Muzzles – A muzzle helps prevent a pup from using his human voice, and serves to make him look more dog like. Hoods look even more dog like (some are very realistic) and are usually less restrictive.

Toys – Every pup needs some good chew toys to chase. The best toys are soft, human teeth are not dog teeth. Hard toys like bones and rawhide shouldn’t be used. Rope toys are OK but should not be tugged on hard.

Bowls – A large dog bowl is best. A human pup’s snout isn’t as long as a real pup’s. Best way to measure is to stick your face in and see if it fits!

Human Pup Play For Me!

Hi fellow pups, what is Human Pup play means to me, well whist it is a fetish, so is leather and that’s is why I identify as a leather pup. Sometimes from outsiders looking in or those who are new or wishing to explore pup play, it may come across as bizarre, but this can be said for all different forms of sexual fetish activity.

Sirus Pups in Sydney hits the nail on the head:

“Like any sexually expressive activity, pup play can be interpreted and performed differently by different folks in different places. What works for a bunch of guys in Sydney Australia certainly can be different to what a few fellas in Munich Germany are doing.”

Fundamentally Human pup play is simply a man, or woman, losing their clothes and inhibitions and behaving like a dog or a pup to an extent. I tend to add my fetish of leather in the type of pup attire I wear or purchase. Other pups may prefer to have no clothing, whist others may be rubber pups, neoprene pups. Pups as I do you can add your fetish to your expression as a human pup. As mentioned in an earlier post – Pup Headspace there can be a deep intense role-play, with a human pup exploring the world from all fours and forming a deep bond with an Owner. So headspace is important for me as a pup, it allows me to loose my inhabitions and the stress of the real world, this in itself is really relaxing. I get a lot out of sharing my pup self with close friends and my partner of 16 years.

“A human being a pup wants to let go of inhibitions, and take a break from the stress of the human world for a time by being a different being.” Pup Boss, Sirus Pups.

Basically human pups simplify their desires and motivations as they embrace a new expression of themselves, they embrace their inner K9, for me I embrace both my inner K9 and my wolf Spirit – My wold spirit is Ripples the Indian blue water wolf.

As a pup I can wag my tail, lick my handler’s hand or curl up in his lap, or sit beside him at his feet. I am able to express my  feelings in new and direct ways, and I can do this without fear of judgement. For me, and many other pups that I have chatted to online, pup play can be one of the most thoughtful, playful, and sane form of  BDSM. Pup Play involves taking into consideration how you express yourself, communicate (no Verbal and in pup language and behave as you let go of your human instincts.

As I have mentioned in previous posts, I tend to have two different pup persona’s one is Comet, now Comet is all about headspace, letting go of my human side and embracing by inner K9. It may involve a role play, but generally its allowing me to relax, or be in a social scene. Comet will walk on two legs as at events sometimes its not practical to be on all fours, Comet is the show off and the cheeky pup, he is the one that most will meet at social events. Comet is the Boisterous pup, who loves a chase and is very extroverted and sometimes mischievous.

The other is Scout, he is a

little different to Comet as he has a large sexual component, and is frisky in nature. Scout seeks discipline in pup play and enjoys the experience of dominance and submission which is a turn-on in and of itself.  Scout is also more structured and not as flighty as Comet. Whist Scout may be out and about in public, he is adventurous and loves to explore, but not always happy to be in a social setting, and is very protective and is likely to be a little aggressive as he will stand his ground. Scout as a human pup is capable of frisky human sexual behaviour with other pups and/or his handler.

Whist it may appear the two two different pups may be interchangeable and sometimes I may be required to switch pups depending on what is being expected of me. Both pups are loyal, whilst Scout is far more obedient then Comet, both are playful and love a good scratch or pat. As per protocols always ask the pup’s handler first, and be aware that in pup mode either pup will protect his handler.

What are the roles in pup play?
There is no authoritative list of the roles in puppy play, but the most common names and meanings are these:
dogs are more interested in the dog persona: barking, being on all fours, the physical aspects of being a dog. They may be a more ‘independent’ pup.
pups are more about the canine head space then the physical. They think like a dog would, and crave attention like a puppy does.
alphas are the more aggressive, dominating pups. They will pose themselves as pack leaders, but will often also look after the pups in their pack.
Handlers are anyone the takes care of a pup. The one holding the leash per se.
Trainers train the pups to behave, do tricks. Trainer and Handlers may overlap.
Masters are usually the same as in other BDSM roles, they own the pups, and may or may not take part in the other roles.
biopup/biocanine – These terms refer to the biological animal (Canis lupus familiaris) to distinguish from the human animal. 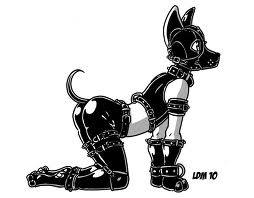